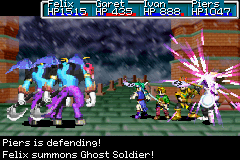 Ghost Soldier being cast in Golden Sun: The Lost Age.

The Roc Psynergy set is a set of non-elemental, Venus, and Jupiter Psynergies introduced in Golden Sun: The Lost Age. It is one of the few upgrading series with more than two forms, possessing four total variations. In basic function, it is somewhat similar to the Call Psynergy series, as both series of Psynergies call in enemies to do the fighting for the caster.

Roc, Grand Golem, Living Armor, and Ghost Soldier are offensive, single-target Psynergies that are Attack-dependent, meaning characters with higher Attack ratings will deal more damage with these attacks. In addition, the caster's Elemental Power and the target's Defense and Elemental Resistance all factor into the damage dealt for Grand Golem, Living Armor and Ghost Soldier. Roc, as a non-elemental Psynergy, only factors Attack and Defense into the damage dealt.

Visually, each Psynergy features the caster summoning a monster, corresponding with the name of the Psynergy, to attack the targets.

Ghost Soldier's attack takes this base damage value and uses it in the following equation:

To word this in prose, Ghost Soldier takes the base damage of the user's normal physical attack, add a set amount of bonus damage to that, and then this result is modified by how much higher or lower the user's Jupiter Power is than the target's Jupiter Resistance. The difference between the user's Jupiter Power and the target's Jupiter Resistance is divided by 400, then 1 is added to this, resulting in what can be called the "elemental damage multiplier". This number is what the Psynergies' damage is multiplied by. Living Armor and Grand Golem are calculated similarly, but take the user's Venus Power and the target's Venus Resistance in place of Jupiter. However, Roc is a special case that will be explained further below.

Roc, as mentioned above, is not aligned with any specific element, and thus does not apply elemental Power and Resistance when calculating damage. Thus, the above equation becomes much more simplified:

To word this in prose, Roc simply takes the base damage done by the user's normal physical attack, and adds a set amount of bonus damage to that.

Therefore, under the above circumstances, Roc would deal approximately 240 points of damage, regardless of Elemental Power and Resistance.

Roc, Grand Golem, Living Armor, and Ghost Soldier are unique to the Tamer class series, an Item-dependent class available to any Adept that has equipped the Trainer's Whip. Currently, the Trainer's Whip is only found in The Lost Age, and thus the Roc set is limited to playable Adepts found in that game.

All four stages of the set are learned at level 45. However, only Roc is available at first: Many Psynergies are only available to the more advanced versions of a class, and Grand Golem, Living Armor, and Ghost Soldier are no exception. What separates Roc, Grand Golem, Living Armor and Ghost Soldier from most Psynergies is that each successive Psynergy replaces the former. To access the other three Psynergies, the appropriate Adept must progress along the Tamer Class. Each stage requires an increasing number of Djinn of the three elements other than the Adept's own, equally split between the three elements. Grand Golem will be learned by the Trainer, Living Armor by the Beastkeeper, and Ghost Soldier by the Beast Lord.

General: Due to the late point at which the Roc series is learned, players will likely be more familiar with Living Armor and Ghost Soldier as opposed to Roc and Grand Golem. This is due to the player normally having the Djinn numbers to progress along the Tamer class by that point in the game. Should the player be in the initial Tamer stage, however, Roc can become a reliable source of damage against opponents with lower Defense, but higher Resistance, as it does not take Power and Resistance into account. Living Armor is the weakest of the group, comparatively, but is cheaper and still has a high enough added damage to significantly harm enemies.

Ghost Soldier, however, plays an important role in the viability of the Tamer class. It has the highest added damage of any physical element attack to date, including Unleashes. In addition to its high added damage, it may sometimes ignore half of the target's Defense, making it akin to the Kikuichimonji's Unleash. Thus, Ghost Soldier becomes extremely useful against bosses, who typically have higher defense. Ghost Soldier's higher PP cost can be a drawback, due to the Tamer's low PP pool.