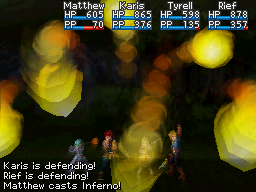 Inferno being cast in Dark Dawn

Fireball (ファイアボール, Fireball), Fire Orb (ファイアオーブ, Fire Orb), and Inferno (ファイアクロス, Fire Cross), originally named Fire (ファイア, Fire), Fireball (ファイアボール, Fireball), and Inferno (ファイアクロス, Fire Cross) in The Lost Age, are a series of Mars attack Psynergy featured in all three games. In Dark Dawn, Fireball is also a Utility Psynergy necessary for game completion. The series was featured in an E3 2010 trailer for Dark Dawn, which showed Tyrell using a Psynergy spell from this series in full 3D. For clarity purposes, the Fireball series will be referred to by its original name when specifically referring to its appearance in Golden Sun and The Lost Age.

In Golden Sun and The Lost Age, the Fire series is a series of offensive, ranged Psynergies. In Dark Dawn, Fireball, the first stage, is a single-target Psynergy, while Fire Orb and Inferno are ranged Psynergies. The overall power of each stage is determined by comparing the caster's Mars Power to the the target's Mars Resistance, and then multiplying this factor by the base power of the particular Psynergy.

In Golden Sun and The Lost Age, the Fire series resembles a group of fireballs spreading out from the user's hand before converging on the targets. The number of fireballs increases with each stage of the series.

In Dark Dawn, the fireball theme remains. Fireball, the first stage, features a single ball of fire being shot straight at the target. Fire Orb features a number of fireballs forming above the user, before arcing over to strike the target. Inferno shows one large fireball forming out of a spiral of fire; the large fireball splits into numerous smaller balls before striking the opponent. Each ball leaves a gash of flame on the ground that quickly fades.

Elemental Power attacks such as the Fireball series use a set base power as the base damage to be modified. For example, the base power of Inferno is 140. Thus, an unmodified Inferno would deal around 140 points of damage.

The Fireball series's attack takes this base damage value and uses it in the following equation:

To word this in prose, The Fireball series takes the base damage of the particular attack, and then modifies this by how much higher or lower the user's Mars Power is than the target's Mars Resistance. The difference between the user's Mars Power and the target's Mars Resistance is then divided by 200, then 1 is added to this, resulting in what can be called the "elemental damage multiplier". This number is what the Psynergies' damage is multiplied by.

For example, if an Adept with a Mars Power of 150 casts Inferno on a monster with a Mars Resistance of 50:

Therefore, an Inferno cast under these circumstances would deal approximately 210 points of damage to the main target. Since Inferno is a ranged Psynergy, adjacent targets would take a percentage of the total damage, with the percentage decreasing as the distance from the main target increases.

In Dark Dawn, Fireball is an important utility Psynergy that is used throughout the game. In the introductory dungeon, Fireball is used to set large flowers on fire, to destroy roots blocking the player's path. Afterwards, Fireball is used mainly as a method to set various objects on fire. In addition, Fireball can trigger certain switches to cause a variety of effects. Fireball can also be used to melt pillars of ice that were previously frozen using Cold Snap. In the Belinsk Ruins, Fireball is used in certain puzzles as the representation of the element of Mars.

Like Douse and Whirlwind, Fireball can be aimed in any direction. Once aimed, it will travel in a straight line for a distance of around six tiles. Thus the player does not need to stand immediately next to a target in order to affect it. For convenience, both Tyrell and Eoleo will know Fireball regardless of class, meaning that the player does not have to worry about shuffling classes to retain access to the Psynergy. In Dark Dawn's prologue, Garet will also show the ability to use Fireball as a utility Psynergy; however, the player is unable to control him, meaning his usage is limited to predetermined cutscenes. 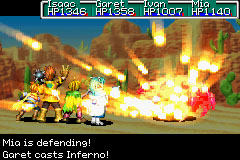 The availability of the Fireball series varies between the GBA games and Dark Dawn. In Golden Sun and The Lost Age, it is available to the Guard class series. Hence, in the GBA series, only Garet can use this series of Psynergy. In Dark Dawn, it is available to the Brute class series. Hence, Matthew, Tyrell, and Eoleo can all use this series of Psynergy. In addition, Tyrell and Eoleo will have access to Fireball, the first Psynergy in the series, no matter what class they is currently in. In both cases, Fireball will be available at Level 4, Fire Orb at level 14, and Inferno at Level 36.

General: The Fireball series is a fairly powerful series. Unlike other series, such as the Starburst Psynergy series, which are PP intensive, Inferno is relatively cheap. The lower PP cost, earlier availability, and strength of the series means that the Fireball series remains extremely useful, especially given that the classes the series is available to both have lower PP pools.

Golden Sun and Golden Sun: The Lost Age: Being available early in the game, and being both slightly more expensive and more powerful than the Flare Psynergy series, the Fire series may be seen as an upgrade to the Flare series. Similarly, the Volcano Psynergy series can be seen as an upgrade to Fire series (although Volcano targets fewer enemies). While it is largely up to player preference as to which of these three would be used, due to Pyroclasm being obtained 12 levels after Inferno, it is quite likely that this will see some use in the meantime if the player intends to use Garet as a multi-target attacker.

Golden Sun: Dark Dawn: The series is the only Mars-based multi-target offensive Psynergy available to the Brute class. While less powerful than the series it replaces, it is cheaper, which is useful when considering the Brute's low PP multiplier. Since the player will most likely be performing physical attacks with the class, the Fireball series will generally be used to soften up multiple targets.