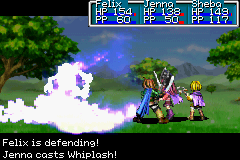 The namesake Psynergy of the Tamer class, Whiplash.

Beastkeeper and Beast Lord redirect here. If you got here searching for a member of the Beastling class series, you were probably thinking of "Beastling" or "Beast Master".

The Tamer class series is a special class series that is only attainable when the Trainer's Whip is equipped to any character. Consequently, this is one of only three class series that can be learned by any Adept. This class also features at least one Psynergy from every element as well the only non-elemental attack Psynergies.

The class series, when at its highest stage of Beast Lord and compared to the other series at their highest respective stages, has high HP, good Attack, and stronger Defense, but very low Agility (tying with the Angel and being higher only than the Hero) and the lowest PP rating of all classes in Golden Sun: The Lost Age (only the Savage Fiend class from Golden Sun: Dark Dawn has lower PP). The series also has a low Luck rating, tying with the Master and being higher only than the Chaos Lord. Noteworthy Psynergy from an endgame perspective includes Phoenix (equivalent to Revive), Manticore (exactly in between Cool Aura and Pure Wish), Ghost Soldier, Whiplash, Impact/High Impact, and Cure Poison, and the heaviest area-of-effect Psynergy it has is technically Fire Dragon. Average stats from an endgame perspective are 132% (144% if you don't factor in Luck).

As of the Game Boy Advance titles, an Adept in this class series is especially likely to be affected by Defense-lowering effects.

The Tamer Class series is unique in that nearly all the Psynergy will change upon a change in class within this series. Thus, it is more convenient to think of the Psynergy in sets rather than series. However, all four classes in this series learn the Impact Psynergy series, Cure Poison, Restore, and Whiplash.

With all steps of the series, ranged Psynergy will do noticeably less damage to secondary targets than comparable Psynergy of most other classes.

When looking at statistics, the Tamer class is at the bottom of the barrel. While possessing a high HP stat and above average Attack, the Tamer has horrible PP and Luck, as well as sub-par Agility.

The low PP pool is a major limiter to the Tamer's usefulness. The Tamer has decent ranged options, which are prohibitive due to their higher cost. Interestingly, the Tamer also has a wide-variety of healing options, including single and mass heals, as well as a Revive variant. In many cases, these healing Psynergies are nearly as strong as their counterparts while being less expensive. The low PP pool prohibits the Tamer from being a go to healing option. However, the variety means that the Tamer can function as a last resort should an emergency arise while battling, allowing superior healers to recover and continue the battle.

One of the few advantages of the class is that most of its offensive move pool is oriented towards physical elemental attacks that take advantage of the above-average Attack stat. Of particular note, Whiplash has a 1.4 damage multiplier while being relatively cheap, while the Beast Lord's Ghost Soldier adds 170 points of damage to a standard Attack, but is much more expensive. Because these moves are single-target moves, the Tamer is a viable option for boss fights, where Attack-based offenses are often preferred over Power-based.

Like all Item Dependent classes however, specializing an Adept into the Tamer Class will leave an awkward number of Djinn floating around. Using the duplication glitch at Trial Road to create multiple copies of the class-changing items or making use of the extra Djinn to create tri-elemental classes like the Jupiter Adept version of Ninja can alleviate this issue to a degree.