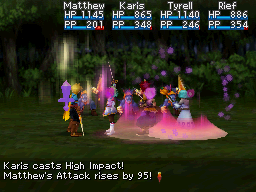 Impact is a single-target Psynergy, that can be targeted on any currently-battling member of the party that is not currently downed. High Impact works similarly, but affects all non-downed actively battling party members.

In Golden Sun, and Golden Sun: The Lost Age, Impact's visual effects show a collection of red orbs gathering into the targeted party member, while High Impact shows a larger collection of red orbs collecting into all four party members. In both cases, a sword will then appear in front of all targeted Adepts to show a rise in Attack. In Golden Sun: Dark Dawn, both Psynergies show a small collection of purple orbs gathering into each affected party member[s], while a small energy field rises around the affected Adept[s]. A purple sword will quickly appear to symbolize the rise in Attack.

In the Golden Sun series, the maximum amount that an individual's Attack can be raised is 50% above the standard Attack. Thus, Impact can be used a maximum of two times on one ally, while High Impact requires 4 uses to raise the Attack to maximum. The effects of Impact and High Impact are only temporary, however, repeated re-castings can keep the Attack-bonus from wearing off. Additionally, the effects of Break can also remove any bonuses from the use of Impact and/or High Impact. 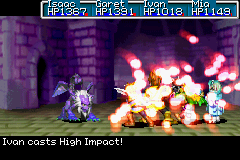 Boosting statistics is a common strategy in RPGs. Since many forms of offense in the Golden Sun series rely on the Attack stat, raising Attack is a excellent way of increasing the offensive power of the party. Since Attack rises as the party grows stronger, Impact only becomes more useful as game wears on. Its limited span means the player must monitor carefully to ensure that it doesn't wear off too early. However, the series is a must when trying to take advantage of damage-multiplying techniques.

In each game, there are several attack raising methods besides Impact. The Demon Spear Psynergy series is identical in function. Meanwhile, the Mars Djinn, Forge, Kindle, and Stoke, each serve as the equivalent of two High Impacts in their respective games. Additionally, Weapon Grace, found in Dark Dawn, is the equivalent of two Impacts. One main advantage of the Impact series is its wide availability. Demon Spear is only available to one class, the Samurai class series, which is usually preferred for its damage dealing prowess rather than support. Likewise, Weapon Grace is unique to Himi. Additionally, the Mars Djinn are limited in use, as they must be re-Set after each use.