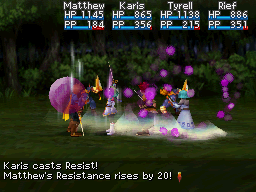 Resist being cast in Dark Dawn

Ward (レジスト, Resist) and Resist (ハイレジスト, High Resist) make up a series of Jupiter-aligned Support Psynergy found throughout the Golden Sun games. The Magic Shell Psynergy series, which is available to the Samurai class series, is identical in function.

Ward is a single-target Psynergy, that can be targeted on any currently-battling member of the party that is not currently downed. Resist is similar, but affects all non-downed active party members.

Ward's visual effects show purple balls of energy entering the targeted Adept; a purple shield then appears to show the rise in Resistance. Resist has an identical visual multiplied by the four battling Adepts.

In the Golden Sun series, Elemental Resistance can be raised to a maximum of 80 points. This means that Ward can be cast a maximum of two times on the same Adept in the same time period, while Resist can be used four times. The effects of Ward and Resist are only temporary, however, repeated re-castings can keep the Elemental Resistance-bonus from wearing off. Otherwise, the effects of Ward and Resist are reverted when the affected Adept is downed or switched out, or is targeted by the Break Psynergy. It should be noted that raising Resistance via Ward or Resist will affect the Resistance level for all four elements. Also, an Adept may only have up to 200 points of Resistance in any element. If an Adept has a resistance of 120 or more, the Adept may hit this limit with multiple castings. 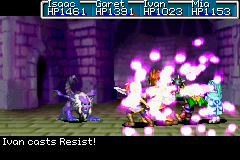 Raising Resistance is an excellent tool for most battles, as the majority of potential attacks are elementally aligned, and all such attacks include Elemental Resistance in their damage calculations. However, such boosts are limited and can wear off within a few turns, resulting in a waste of a turn and PP in certain cases. Despite this, such techniques can be highly useful, and are a major support tool to the classes that have them.

Against common foes, Ward and Resist have little use. Most common enemies can be dispatched within a turn or two. In addition, many enemies do not use Elementally-aligned attacks on a regular basis. Thus, using Ward or Resist is simply a way to unnecessarily draw out a battle.

While most bosses in Golden Sun and Golden Sun: The Lost Age have Break, which makes it difficult to raise Resistance for any significant length of time, it can still be a useful tool for damage reduction. They especially shine against bosses like the Star Magician, who rely heavily on Elemental Power-based techniques. Few bosses in Golden Sun: Dark Dawn have Break, making Ward and Resist easier to maintain for longer periods of time, increasing their worth.