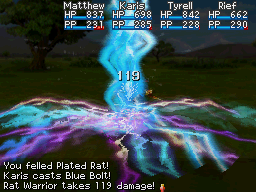 Bolt, Flash Bolt, and Blue Bolt are are offensive, ranged Psynergies. The total amount of damage is determined by comparing the user's Jupiter Power to the target's Jupiter Resistance and using this value to modify the base power of the particular Psynergy.

Elemental Power attacks such as Bolt, Flash Bolt, and Blue Bolt use a set base power as the base damage to be modified. For example, the base power of Blue Bolt is 90. Thus, an unmodified Blue Bolt would do around 90 points of damage.

To word this in prose, Bolt, Flash Bolt, and Blue Bolt take the base damage of the particular attack, and then modify this by how much higher or lower the user's Jupiter Power is than the target's Jupiter Resistance. The difference between the user's Jupiter Power and the target's Jupiter Resistance is then divided by 200, then 1 is added to this, resulting in what can be called the "elemental damage multiplier". This number is what the Psynergies' damage is multiplied by. 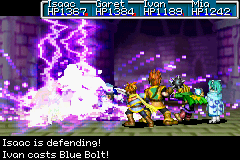 General: In terms of function, the Bolt series is roughly equivalent to the Flare and Quake series, being a weaker yet comparatively powerful series learned early on in the game. For both the Seer and the Medium class, however, the series is the only offensive Jupiter-based series that is learned and the only other offensive series besides the Growth/Froth. Thus, Blue Bolt will likely see continued if limited use, due to a dearth of offensive options.