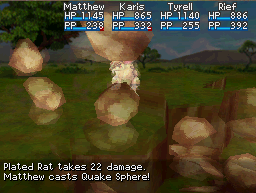 Quake (クエイク), Earthquake (アースクエイク), and Quake Sphere (クエイクスフィア) are a series of offensive Venus Psynergies featured throughout the Golden Sun series. They are among the earliest Psynergy spells the player encounters and masters, and are only available to party leaders.

Quake, Earthquake, and Quake Sphere are offensive, ranged Psynergies. The overall power of each stage is determined by comparing the user's Venus Power and the target's Venus Resistance, and multiplying the resultant ratio by the base power of the Psynergy being used.

Visually, each stage of the quake series features three columns of earth rising from the ground underneath the targets, bouncing them up and down. Quake does this once, Earthquake, twice, and Quake Sphere three times.

Quake Sphere's attack takes this base damage value and uses it in the following equation:

To word this in prose, Quake, Earthquake, and Quake Sphere take the base damage of the particular attack, and then modifies this by how much higher or lower the user's Venus Power is than the target's Venus Resistance. The difference between the user's Venus Power and the target's Venus Resistance is then divided by 200, then 1 is added to this, resulting in what can be called the "elemental damage multiplier". This number is what the Psynergies' damage is multiplied by. 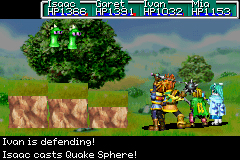 For example, if an Adept with a Venus Power of 150 casts Quake Sphere on a monster with a Venus Resistance of 50:

General: The Quake series is among the earliest Psynergy spells the player can try out. Thanks to its relative power and cheap cost, combined with the speed each stage is learned, the series is an excellent choice for early game. As the Squire levels up, the Quake series will usually be left behind for more powerful options such as the Gaia Psynergy series and the duo of Ragnarok and Odyssey.

Golden Sun: Quake will be the first offensive Psynergy available to Isaac, and will be used throughout the prologue. By the time the main game begins, Isaac will have learned Earthquake, which can be put to good use in the thief trio fight in Vault. Quake Sphere will be useful when learned, but will be set aside for stronger Psynergies like Ragnarok, Clay Spire, and Mother Gaia by game's end.

Golden Sun: The Lost Age: By the time the player is able to control Felix, he will already know Earthquake, giving the player a useful option for early random encounters. Earthquake is quite useful against Chestbeater boss trio in the Kandorean Temple. Should the player level up to 15 before hand, Quake Sphere can be a useful tool against Briggs and his Sea Fighters.

Golden Sun: Dark Dawn: Matthew will learn Quake during his exploration of the first dungeon, but it will compete with the more powerful, but single-target Growth that he learns inherently. Since Matthew would normally need a Mars Djinn set during the Tanglewood portion, Quake will not see much use. Earthquake, available by the time the main game begins, is an excellent choice for the early game, and can be useful against the Stealthy Scouts, assuming Matthew's Psynergy isn't exhausted. Meanwhile, Quake Sphere is excellent during the later portions of Ei-Jei, but will quickly be discarded for more powerful options.