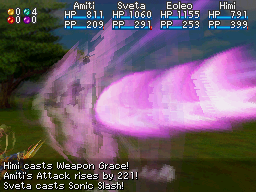 Slash is an offensive, single-target Psynergy, while Wind Slash and Sonic Slash are offensive, ranged Psynergies. The total amount of damage is determined by comparing the user's Jupiter Power to the target's Jupiter Resistance and using this value to modify the base power of the particular Psynergy.

Visually, each stage of the Slash series features a varying number of purple-colored blades of air striking the target(s). The number and size of the blades increases with each successive stage of the series.

Elemental Power attacks such as Slash, Wind Slash, and Sonic Slash use a set base power as the base damage to be modified. For example, the base power of Sonic Slash is 120. Thus, an unmodified Sonic Slash would do around 120 points of damage.

To word this in prose, Slash, Wind Slash and Sonic Slash take the base damage of the particular attack, and then modify this by how much higher or lower the user's Jupiter Power is than the target's Jupiter Resistance. The difference between the user's Jupiter Power and the target's Jupiter Resistance is then divided by 200, then 1 is added to this, resulting in what can be called the "elemental damage multiplier". This number is what the Psynergies' damage is multiplied by. 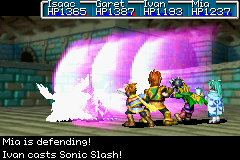 Sonic Slash as it appears in the GBA games.

The Slash series is available to multiple classes, meaning that it is possible for all Jupiter, Mars, and Mercury Adepts to access the class. The Jupiter Adept Sveta has access to Slash in her mono-elemental Beastling class series, which she can access when she has no or only Jupiter Djinn set to her. Other Jupiter Adepts, as well as Mars and Mercury Adepts, can access Slash in the Ranger class series, which require varying amounts of Jupiter, Mars, and Mercury Djinn, with the specific combination depending on the Adept's element. Mars and Jupiter Adepts can also access the series via the Jupiter version of the Pilgrim class, which requires a combination of Mars and Jupiter Djinn.

General: The Slash series is similar and terms of power and range to the Mercury-based Douse Psynergy series. Like the Douse series, the Slash series can receive decent use during the early-to-mid portions of the game, as the series is available fairly early. In addition, it has the advantage of being available to a wide-range of Adepts. However, in the grand scheme of things, the Slash series will typically be outperformed by the Plasma and Volcano series.

Golden Sun and Golden Sun: The Lost Age: Slash's use in these series is typically limited to the Pilgrim and Ranger classes. In early portions of the game, Slash could be considered an alternative to Whirlwind, being cheaper and more powerful at the cost of range. As the player progresses, the series simply serves as a placeholder for more powerful Psynergies.

Golden Sun: Dark Dawn:The Slash series is the cheapest offensive Psynergy available in Sveta's Beastling class. However, by the time she joins the party, it competes heavily with the efficiency of the Ray Psynergy series and the raw power of the Whirlwind series. The only use for the series will typically be during the short period after Sonic Slash is learned, but before Destruct Ray is learned.

An item known as a Weasel's Claw can be used by any Adept to emulate Sonic Slash in order to damage multiple enemies. Weasel's Claws can typically be found as drops from enemies or as treasure chest prizes.