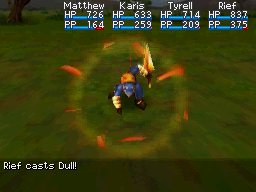 Dull being cast in Dark Dawn

Dull (ダル, Dull) and Blunt (ダルダル, Dull Dull) make up a Jupiter Support Psynergy series featured throughout the Golden Sun series. It is available to the White Mage class series.

Dull's visual effects features a small sword forming in front of the target. The sword then shatters, indicating a the lowering of attack. Blunt is nearly identical, simply multiplying the effect by the number of targets.

In the Golden Sun series, the maximum amount that an individual's Attack can be reduced is 50% below the standard Attack rating. Thus, Dull can be used a maximum of two times on one ally, while Blunt requires 4 uses to lower the Attack to minimum. The effects of Dull and Blunt are only temporary, however, repeated re-castings can reestablish the Attack-reduction should it wear off. Because Dull and Blunt reduce statistics rather than raise them, both Psynergies are immune to the effects of Break. 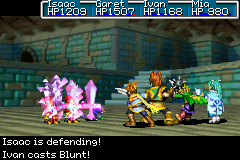 Reducing an enemy's Attack may seem to be an excellent option at first glance. However, Dull and Blunt suffer serious drawbacks. First, it has no effect on Power-based offenses, and thus can be ineffective against opponents that rely on Power-based Psynergy. In addition, the chance of a successful casting is reduced when fighting bosses, enemies which would be the most inhibited by the Attack reduction. While Dull and Blunt can easily affect common monsters, they are often downed before such effects can be useful. Finally, Dull and Blunt are unique to the White Mage class, which is usually unavailable when Dull and Blunt would be most useful due to the high Djinn requirements of the class.

However, if it does work, and if used in conjunction with a move like Bind or Guard, then this may prove to have a large effect on the outcome of the battle, especially since it is not effected by the Break Psynergy.