From Golden Sun Universe
(Redirected from The Broken Seal)
Jump to: navigation, search

This article is about the first game in the franchise. For other uses, see Golden Sun (disambiguation).

Golden Sun (黄金の太陽 開かれし封印 Ōgon no Taiyō: Hirakareshi Fūin / Golden Sun: The Broken Seal in Japan), is the first installment of a series of role-playing video games developed by Camelot Software Planning and published by Nintendo. It was released in November 2001 for Nintendo's Game Boy Advance, with a Game Boy Advance sequel, Golden Sun: The Lost Age, in 2003. The game is notable for certain unique game elements, such as the use of special "Djinn" that empower the player and can be used against enemies.

The story follows a band of magic-attuned "Adepts" who are sent from their home town into the wide world of Weyard to prevent the destructive power of Alchemy from being released as it was in the past. Along the way the Adepts gain new abilities, help out the local populations, and learn more about why Alchemy was sealed away. Upon its release, the game was highly praised; IGN said that Golden Sun could "arguably be one of the best 2D-based Japanese RPGs created for any system."

Golden Sun, in terms of its plot and setting, takes place in a fantasy setting that may be considered fairly typical of classic-style RPGs. It is the world of "Weyard", a massive earth-like environment with several major continents and many oceans. Weyard is revealed by the game's sequel, Golden Sun: The Lost Age, to be a setting modeled off the flat Earth ideal of the world; it is a flat, vaguely circular plane whose oceans perpetually spill off the edge of the world's entire perimeter into an endless abyss. The huge waterfall at the edge of the world is known as Gaia Falls. The plot progression of Golden Sun spans the two largest continents in the world's central region: The Eurasian-themed main continent of Angara to the north and the more African and Middle Eastern-inspired continent of Gondowan to the south.

Golden Sun starts in the village of Vale, where a young boy named Isaac is woken by his mother so that they may get to a safe place due to an impending avalanche in the raging storm outside. Isaac meets up with his friends Garet and Jenna and are asked to find help to save Jenna's brother Felix. As they return with help, a giant boulder falls and crushes a house, and Felix, Isaac's father, and Jenna's parents are lost down the river.

Three years later, Isaac, Garet, and Jenna are studying Psynergy with the scholar Kraden who takes them into Sol Sanctum where they stumble upon the Elemental Stars. They are confronted by a group of mysterious strangers who take the stars and kidnap Jenna and Kraden. Isaac and Garet are saved by the Wise One who challenges them to go on a quest to recover the Elemental Stars and restore the Elements to their sealed state.

For more information on the game's storyline, see the Golden Sun section of the full series plot outline. 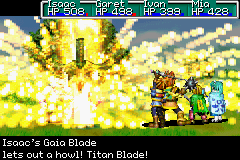 Isaac summons Titan Blade with Gaia Blade, the most elite sword of the first installment.

The player controls a total of four characters of Golden Sun. Isaac is a seventeen-year-old Venus Adept from the village of Vale, who serves as the game's silent protagonist. Garet, a seventeen-year-old Mars Adept also from Vale, is big and strong but slightly oafish and unfocused; nonetheless he is Isaac's closest companion. Ivan is a fifteen-year-old Jupiter Adept who has lived with a famous merchant in the town of Kalay all his life, but whose real hometown is actually Contigo, a town on the continent of Atteka; he is a somewhat quiet, insightful boy. Mia, a seventeen-year-old Mercury Adept from the wintry town of Imil, is a gentle healer from a heritage of Mercury Adept clansmen. A fifth character seen and playable in the game's exposition sequence is the 17-year-old Mars Adept Jenna, another childhood friend to Isaac, and Felix's sister, in Vale.

The primary antagonists of the game are Saturos and Menardi, a pair of immensely powerful and talented Mars Adepts of a foreign race hailing from Weyard's frozen northlands. Their aim is to restore Alchemy to the world, and they are assisted by the powerful and mysterious Mercury Adept Alex, of the same heritage as Mia, and Jenna's older brother, the 18-year-old Venus Adept Felix, who is indebted to Saturos for the latter's saving Felix from death.

Golden Sun underwent a development cycle of between twelve and eighteen months by Camelot Software Planning, which is considered a long period of time for the development of a handheld video game[1] and was described as a "testament" to the positive results a long development cycle can bring to a game. It was shown in early, playable form at the Nintendo Spaceworld Expo in Japan on August 2000. North American previewers received the game a few weeks before the release, and IGN noted that the experience of developing Shining Force for Sega helped Camelot develop a gripping RPG for the handheld.

Originally, Camelot planned to create a single title instead of a series, and in the extremely early stages of their project they had created a game design document for the one Golden Sun game to be on the Nintendo 64 console. When it became apparent the N64 was to be superseded by the Nintendo GameCube, Camelot shifted their focus to making a game on the handheld Game Boy Advance.[2]

As a handheld title, Golden Sun was originally going to be a single game, but due to both the hardware limitations of putting the game on a single Game Boy Advance cartridge and the developers' own desire for what they wanted to do with the game, it was expanded to become two successive games, Golden Sun and Golden Sun: The Lost Age. Scenario writer Hiroyuki Takahashi and director Shugo Takahashi had previously designed Shining Force III, where the story involved playing through the perspectives of both the "good" side and the "bad" side of the characters. Thinking that it was an effective way of conveying the full story of a fictional game world, they incorporated elements of this storytelling methodology into the two-game setup of the Golden Sun series, having the player control the "good guys" in Golden Sun and members of the antagonistic party in The Lost Age.

Golden Sun met with generally strong reviews, of which many were emphatically glowing. Many praised the game's vibrant graphics, high-quality sound, and varied, refined RPG gameplay, with particular optimism on the Djinn-based gameplay system and Battle aspect. It was also praised for being graphically stunning for the limitations of the 32-bit cartridge, with Gamespot noting that "Golden Sun is a throwback to some of the SNES' best." G4 TV stated "It's the best original (nonport) GBA RPG to date", while GamePro raved that Golden Sun was "A huge, fantastic, creative, and wickedly fun RPG that doesn't seem to care that it's 'just' on a GBA." It was rated the 31st best game made on a Nintendo System in Nintendo Power's Top 200 Games list.

Complaints about the game generally revolved around the overuse of text dialogue in the numerous cutscenes throughout the game, especially in the prologue, causing the game to get off to a cumbersome start. In addition, some faulted Golden Sun for still relying on the "wander around, get into a random battle, win battle, wander around, random battle, etc." theme in many role-playing games. Golden Sun rates a 9.2/10 on MobyGames, and an 8.5/10 on GameInformer.com (the main complaint being low replay value, it was still titled "GBA's Golden Child").

The game was sold 129,000 copies in the first five days in Japan and being the best-selling game of the period.

See the quick spoiler-free walkthrough for a "perfect" rundown of the game's progression and secrets in a general overview style.