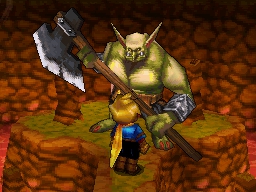 The Ogre Titans (ティタンオーガ) are an optional boss in Golden Sun: Dark Dawn. They appear in an area of the Burning Island Cave that is only accessible with the Sol Blade. They replace Valukar as the guardian of Daedalus' Summon tablet. There are five Ogre Titans, each one becomes increasingly bigger and stronger than the last.

As a boss[edit | edit source]

The Ogre Titans are a unique battle in that the player must fight five increasingly strong variations, starting with Ogre Titan 1. After the first turn, Ogre Titan 2 will join the battle. Following that, a new Ogre Titan will replace any fallen Ogre Titan, though only 2 Titans will be on the field at any one time.

Each Ogre Titan is level 44, is especially likely to be affected by HP-draining effects, and has its own set of stats, which are as follows:

The first four Ogre Titans use the following battle commands with low intelligence:

All together, the minimum reward for this battle is 58,800 Experience Points, 5,301 Coins, and access to the Daedalus summon.

The Ogre Titans could be considered the easiest of the four "superbosses". With the Ogre Titans only capable of physical strikes, the only catch to the battle is its drawn-out nature. For this reason, buffing spells such as Guard are extremely effective, as it effectively minimizes any potential damage. The player need only recast the preferred Psynergy occasionally to prevent the buffs from wearing off. Due to the drawn-out nature of the fight, players might consider having PP-restoring items or equipment on hand, should the player be casting Psynergy on a regular basis.

When choosing an offensive strategy, the popular "summon rush" strategy can be very effective. However, give that each Ogre Titan has increasingly more HP, and Summons deal additional damage proportional to the target's HP, it may be more beneficial to use Psynergy/physical attacks on the weaker Ogre Titans while saving Summons (particularly Mars-based Summons) for the later Ogre Titans, particularly Ogre Titan 5. For the first few Ogre Titans, the HP stat is low enough that they can be easily dispatched within a few turns; vice versa, summons will do lower damage and effectively waste them. Meanwhile, using summons against Ogre Titan 5, which boasts more HP that the previous four combined, will do much more damage, thus shortening the final part of the battle.

Due to their Mars weakness, the Sol Blade that is required to fight them works quite well, and Matthew is able to take out over 1/10th of the fifth titan's HP a turn if he uses equipment to maximize his unleash chances to guarantee an unleash. The battle is very easy if stat buffs for defense and attack are applied in the early stages and regularly recast to prevent their expiration, but the battle will still take a decent time thanks to the massive combined HP count of the group.

The Ogre Titans are given little to no background, and have no direct effect on the actual story. The Ogre Titans typically attack using brute force, and rely on the increasing strength of each Titan when battled. Each Titan wields an increasingly large Axe which is their main source of offensive damage.

The Ogre Titans reside in the deepest part of Burning Island Cave, behind a door that can only be unlocked via the Sol Blade. Should any capable Adepts enter the dungeon and have the means to enter the final chamber, the smallest Ogre Titan will await the player, and telepathically announce themselves as being the guardian of fire. In Dark Dawn, Matthew's party will enter the dungeon while exploring the Eastern Sea, and challenge the Ogre Titans. After a long battle which tests the endurance of the young Adepts, the party will defeat the Ogre Titans and gain the ability to summon Daedalus, the embodiment of fire.