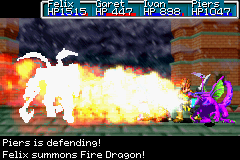 Fire Dragon being cast in Golden Sun: The Lost Age.

Wyvern (ワイバーン), Blue Dragon (ブルードラゴン), and Fire Dragon (ファイアドラゴン) are a set of related Mars and Mercury Psynergies introduced in Golden Sun: The Lost Age. In basic function, it is somewhat similar to the Call Psynergy series, as both groups of Psynergies summon monsters to do the fighting for the caster.

Wyvern, Blue Dragon, and Fire Dragon are offensive, ranged Psynergies. The total amount of damage is determined by comparing the user's Mars Power to the target's Mars Resistance and using this value to modify the base power of the particular Psynergy. All three Psynergies in the set will do reduced damage to secondary targets in comparison to Psynergies of equivalent power.

Elemental Power attacks such as Wyvern, Blue Dragon, and Fire Dragon use a set base power as the base damage to be modified. For example, the base power of Fire Dragon is 140. Thus, an unmodified Fire Dragon would do around 140 points of damage.

Fire Dragon's attack takes this base damage value and uses it in the following equation:

To word this in prose, Wyvern and Fire Dragon take the base damage of the particular attack, and then modifies this by how much higher or lower the user's Mars Power is than the target's Mars Resistance. The difference between the user's Mars Power and the target's Mars Resistance is then divided by 200, then 1 is added to this, resulting in what can be called the "elemental damage multiplier". This number is what the Psynergies' damage is multiplied by. Blue Dragon uses a similar formula, simply replacing Mars Power and Resistance with Mercury.

For example, if an Adept with a Mars Power of 150 casts Fire Dragon on a monster with a Mars Resistance of 50:

Therefore, a Fire Dragon cast under these circumstances would deal approximately 210 points of damage to the targeted enemy. Since Fire Dragon is a ranged Psynergy, adjacent targets take a percentage of the total damage, with the percentage decreasing as distance from the main target increases. However, this percentage is much lower than Psynergies of equivalent power.

All three stages of the set are learned at level 32. However, none of the Psynergies are available to the Tamer stage of the class. Many Psynergies are only available to the more advanced versions of a class, and Wyvern, Blue Dragon, and Fire Dragon are no exception. What separates Wyvern, Blue Dragon, and Fire Dragon from most Psynergies is that each successive Psynergy replaces the former. To access each Psynergy in the set, the appropriate Adept must progress along the Tamer Class. Each stage requires an increasing number of Djinn of the three elements other than the Adept's own, equally split between the three elements. Wyvern will be learned by the Trainer, Blue Dragon by the Beastkeeper, and Fire Dragon by the Beast Lord.

General: The Wyvern set is the strongest Power based series available to the Tamer, and only one of two such sets. While possessing decent power for the Level the set is learned at, the Tamer's low PP pool will prohibit multiple uses. In addition, the limitations of Power and Resistance mean that the set will quickly drop in power in comparison to the Tamer's multiple Attack-based options. However, the series will still be useful in situations where a ranged offense is necessary. In addition, Blue Dragon is the only Mercury-based offensive option in the Tamer's entire Psynergy lineup.