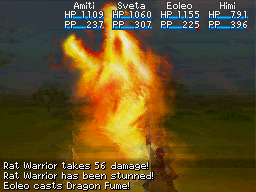 Fume, Serpent Fume, and Dragon Fume are offensive, single-target Psynergies. The final amount of damage is determined by comparing the user's Mars Power to the target's Mars Resistance and using the difference to modify the base power of the particular Psynergy in use.

Visually, each stage of the series resembles a serpentine entity of flame being shot out of the user, which arcs over to crash into the target in an explosion. With each successive stage, the plume of flame becomes much larger, and the serpentine head more clearly defined.

Elemental Power attacks such as the Fume series use a set base power as the base damage to be modified. For example, the base power of Dragon Fume is 230. Thus, an unmodified Dragon Fume would deal around 230 points of damage.

Dragon Fume's attack takes this base damage value and uses it in the following equation:

To word this in prose, the Fume series takes the base damage of the particular attack, and then modifies this by how much higher or lower the user's Mars Power is than the target's Mars Resistance. The difference between the user's Mars Power and the target's Mars Resistance is then divided by 200, then 1 is added to this, resulting in what can be called the "elemental damage multiplier". This number is what the Psynergies' damage is multiplied by.

For example, if an Adept with a Mars Power of 150 casts Dragon Fume on a monster with a Mars Resistance of 50:

Therefore, a Dragon Fume cast under these circumstances would deal approximately 345 points of damage. 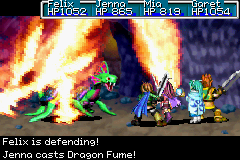 The Fume series is available to the Flame User class series and the Pirate class series. Both classes are mono-elemental Mars-based classes that are the base classes of Jenna and Eoleo, respectively. Thus, the series is unique to both Adepts. For both classes, Fume is learned at level 5, Serpent Fume at level 26, and Dragon Fume at level 47.

General: The Fume series is unique for being entirely a single-target Power-based series. Each stage of the Fume series holds great power, making it a great tool for battle. However, it can become outclassed by Attack-based offenses at higher levels.

Golden Sun: The Lost Age: Fume is available to the level 5 Jenna at the prologue of The Lost Age, where it is an ideal weapon to defeat the Ruffians one-by-one. All three Psynergies are very powerful and practical as they are acquired. Serpent Fume, in particular, is excellent as an offensive measure in the boss fight against Poseidon, so it is extremely prudent to level up the party to level 26 before attempting Poseidon. Dragon Fume remains a powerful tool, but the large PP cost means that its uses are limited.

Golden Sun: Dark Dawn: By the time Eoleo joins the party, he will know both Fume and Serpent Fume. While both techniques retain their power, they are outclassed by Keelhaul and Vicious Chop, a series of Elemental Physical Attacks that are unique to Eoleo. While the Fume series's power remains fixed, the Keelhaul series grows in power as Eoleo's Attack increases. In addition, Eoleo's low PP pool limits usage of the more powerful members of this series.

In other media[edit | edit source]