For the Moloch summon, see Moloch.

This Djinni can be obtained via a glitch when transferring Djinn between party members.

Because it is a glitch, Moloch does not have an enumeration in the Djinn Guide; going by ID within the game's files (and so including other glitch Djinn), it is the thirty-first and last Jupiter Djinni and the last Djinni overall. The glitch to acquire it can be performed as soon as Flint joins the party outside of the Lookout Cabin, making it theoretically the first Jupiter Djinni accessible in Dark Dawn. It is the only known glitch Djinni that is accessible without a hacking device. 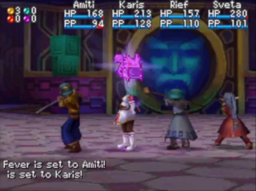 Moloch recovering on Karis after being used as part of a summon.

Unlike all other Djinn in the series, Moloch cannot be used as a Djinni in battle. If placed into Standby prior to a battle commencing, Moloch can be used as part of any summon except for the Jupiter summon. If Moloch is used to summon Jupiter, the game will crash.

Moloch shares the same basic model as the Venus Djinni Vine, but has the Jupiter colour palette applied to the model, leading to its distinctive look and red eyes.

How to Obtain[edit | edit source] 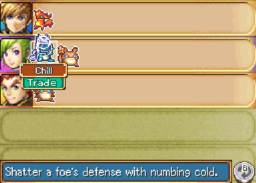 Moloch being traded onto Chill as part of the process to create Moloch. Upon making this trade, Chill will be permanently lost on this file.

To obtain Moloch, the player must have a space to use the 'Give' action to give a Djinni to an Adept. Consequently, Moloch cannot be obtained if the player has already obtained all 72 Djinn. Creating Moloch also requires the player permanently to lose one of the other Djinni that the player has collected - the player can choose which Djinni is lost.

The method to obtain Moloch is as follows:

Moloch's icon may not be immediately visible upon doing this method - exiting and entering the menu will display Moloch's icon correctly.

This method can be repeated as many times as the player wishes, i.e. it is possible for a player to have multiple Molochs.

A video demonstrating how to do this can be found here. 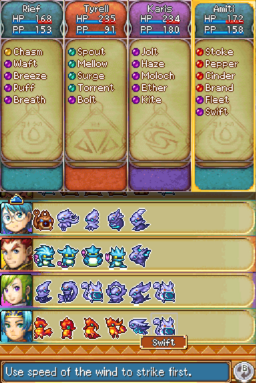 A Djinn menu showing Swift's corrupted portrait and a phantom Moloch at the end of Karis' djinn.

For the most part, Moloch can be obtained and used without any negative consequences to the player. There are some things that the player should be aware of when using Moloch:

If multiple Molochs are obtained, they abide by the following rules:

Golden Sun: Dark Dawn: Moloch can be obtained as soon as the player as the player receives Flint and can otherwise be obtained at any time prior to all 72 Djinn being collected. Moloch's stat bonuses can have considerable impact early on in the game. For instance, one Moloch set on Matthew makes him virtually unkillable even by the dangerous Stealthy Scouts. Moloch's agility bonus will generally ensure that any Adept who has Moloch set will act before any enemies. Moloch has a natural synergy with Sveta's Beastform ability due to the Wild Animal class' naturally high stat bonus multipliers and the fact that two Molochs can prevent Jupiter Djinn from being consumed by the Beastform effect.

Why This Glitch Works[edit | edit source]

Imagine that you want to trade Flint on Matthew with Chill on Karis. Normally, after confirmation of the trade, what happens is the Djinn are swapped and the cursor remains on Flint (who is now on Karis). If the stylus is immediately pressed on the screen after confirming the trade, the stylus will pick up whatever Djinni is in the position that Flint was in - and after the swap this means the stylus will grab Chill.

Now let's imagine a situation where Flint is the right most Djinn on Matthew and we are giving Flint to Karis from Matthew. When the stylus is pressed to the screen the game attempts to pick up the Djinni that has taken Flint's place in Matthew's Djinn list. But since Flint was at the end of the list there, is no Djinni to be picked up, so the stylus picks up whatever memory value is there and interprets that as a Djinni. Empty spaces in an Adept's Djinn list are indicated by 0xFF in memory. When pressing the stylus down the stylus, grabs the 0xFF memory value and turns it into the corresponding Djinni - which happens to be Moloch.

Moloch is the name of one of the game's Summons. All of the last 13 glitch Djinn borrow the names of Summons, and Moloch is the Summon that happens to occupy the last slot.