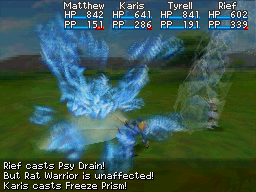 Prism (プリズム), Hail Prism (ヘイルプリズム), and Freeze Prism (フリーズプリズム) make up the strongest Mercury Power-based Psynergy in the series, bar none. They're generally featured as a counterpart to the Jupiter-based Plasma Psynergy series.

Hail Prism can be emulated by any Adept that uses the Crystal Powder item.

Prism, Hail Prism, and Freeze Prism are offensive, ranged Psynergies. The total damage inflicted is determined by comparing the caster's Mercury Power to the target's Mercury Resistance and using this number to modify the base power of the particular Psynergy in use.

Attacks from each stage of the Cool series take this base damage value and uses it in the following equation:

To word this in prose, take the base damage of the particular attack, and then modify it by how much higher or lower the user's Mercury Power is than the target's Mercury Resistance. The difference between the user's Mercury Power and the target's Mercury Resistance is then divided by 200, then 1 is added to this, resulting in what can be called the "elemental damage multiplier". This number is what the Psynergies' damage is multiplied by. 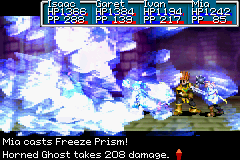 Freeze Prism being cast in the GBA games.

Therefore, a Freeze Prism cast under these circumstances would deal approximately 285 points of damage to the targeted enemy. Since Freeze Prism is a ranged Psynergy, adjacent targets take a percentage of the total damage, with the percentage decreasing as distance from the main target increases.

General: The Prism series can be compared to the Jupiter-based Plasma Psynergy series. Like the Plasma series, the Prism series receives heavy usage due to its high power. Also adding to its usage is that the Pilgrim, Hermit, and White Mage classes are more support-oriented, as opposed to Attack-oriented, meaning that the series is often the offense of choice for dealing with larger groups of enemies.

Golden Sun: The Prism series is an integral part of a Hermit's lineup (often Ivan), alongside the Plasma series. Prism can be of use against the Mars-based enemies in the various deserts, as well as the Saturos/Menardi/Fusion Dragon fights.

Golden Sun: The Lost Age: As before, the Prism series will be heavily used by any Hermits, White Mages, or Pilgrims. Freeze Prism is especially useful in Mars Lighthouse, due to an abundance of Mercury-weak enemies. However, its power means that it is useful against any enemy not resistant to Mercury.

Golden Sun: Dark Dawn: Due to weaker enemies in general, the Hermits, White Mages, and Pilgrims would not be healing as regularly. Thus the Prism series becomes an even better offense for weakening groups of targets. In later potions of the game, enemies sometimes come in groups of 4 or more, meaning that even Freeze Prism's great range comes into play.