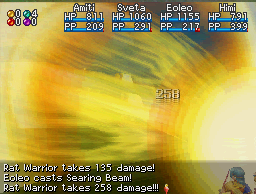 Beam, Cycle Beam, and Searing Beam are offensive, ranged Psynergies. The total amount of damage is determined by comparing the user's Mars Power to the target's Mars Resistance and using this value to modify the base power of the particular Psynergy.

Visually, each stage of the beam series the user charging a ball of flame, which then is fired in the form of a laser-like beam. Cycle Beam additionally features a shockwave that is released as the laser is fired. Searing Beam also features the shockwave, but adds a corkscrew-like burst of energy surrounding the laser.

Searing Beam's attack takes this base damage value and uses it in the following equation:

To word this in prose, Beam, Cycle Beam, and Searing Beam take the base damage of the particular attack, and then modifies this by how much higher or lower the user's Mars Power is than the target's Mars Resistance. The difference between the user's Mars Power and the target's Mars Resistance is then divided by 200, then 1 is added to this, resulting in what can be called the "elemental damage multiplier". This number is what the Psynergies' damage is multiplied by. 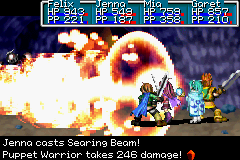 Searing Beam being cast by Jenna in The Lost Age.

For example, if an Adept with a Mars Power of 150 casts Searing Beam on a monster with a Mars Resistance of 50:

Therefore, a Searing Beam cast under these circumstances would deal approximately 255 points of damage to the targeted enemy. Since Searing Beam is a ranged Psynergy, adjacent targets take a percentage of the total damage, with the percentage decreasing as distance from the main target increases.

The Beam series is limited to the Flame User class series and the Pirate class series, mono-elemental Mars-based classes that serve as the base classes for Jenna and Eoleo, respectively. Jenna and Eoleo are members of their respective base classes when they have no or only Mars Djinn Set. In both cases, Beam is learned at Level 7, Cycle Beam at Level 21, and Searing Beam at Level 41.

Golden Sun: The Lost Age: The Beam series is Jenna's most powerful ranged attack. Beam is one of the game's best early techniques. It is equal in cost and range to Flare Wall, but is more powerful. Likewise, Cycle Beam is equal in power to Flare Storm, with Cycle Beam possessing a slightly higher cost but a wider range. Cycle Beam is an excellent option while exploring the Great Eastern Sea, and can be used effectively against the Aqua Hydra and Poseidon, alongside Serpent Fume. Searing Beam is one of Jenna's best endgame moves in her base class, and the only one that is ranged. Overall, the Beam series will be one of Jenna's most commonly used option.

Golden Sun: Dark Dawn: By the time Eoleo joins the party, he will already know Beam and Cycle Beam. Cycle Beam will be his most powerful ranged option. Cycle Beam's usage may be lower than in The Lost Age, since Eoleo also has an excellent physical elemental attack in Vicious Chop. Searing Beam is Eoleo's most powerful ranged Psynergy, and is useful for weakening multiple targets. However, Eoleo's lower PP pool means that Searing Beam many not see multiple uses in battle.