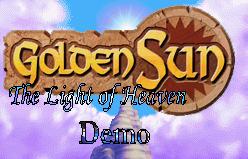 The title screen for Golden Sun: The Light of Heaven.

Project Iris was a fan game being made by Plus One Productions. The project has been dropped by its production team. It is a prequel to the two real Golden Sun games, although Isaac and company appear in the prologue. A demo version existed at one point, but it is not currently available for download. Project Iris is a code name for the game, and it has become known that the game's official name is Golden Sun: The Light of Heaven. Interest in the game has dropped considerably since the reveal of Golden Sun DS. 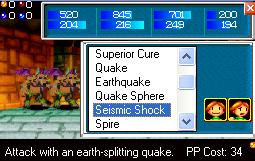 A screenshot of the Psynergy selection screen in battle.

The battle mechanics for Project Iris are the same as they are in the Golden Sun games. The programmer reconstructed the battle engine, and the only differences lie in the interface. Different bars are used for health and Psynergy, and all selections are made with the mouse. The controls will be different when the game is in its final version for the DS.

When using Psynergy in the dungeon, it should be noted that the range for map Psynergies is extended from that of the two real games. Some obstacles that may first appear to be unsolvable can be overcome by using Psynergy on an object that is too far away.

The completed game will feature multiple game paths and endings which will be triggered by choices the player makes in the game and how they fare in certain plot-related battles. Different game paths will also feature different playable characters.

Project Iris was intended to have multiple and distinct plot branches and different endings that would depend on choices the player made. The game's script was never finished, but the team made considerable progress. An overview of the game's plot can be found here. 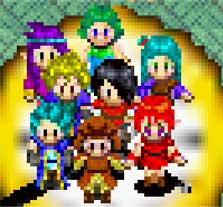 The main character of The Light of Heaven is a Mars Adept named Aram. He and his friend Daryl, a Jupiter Adept hail from Toblios. The game takes place a long time before Golden Sun and The Lost Age, and Toblios is the name that Tolbi goes by in that period. The game begins with Aram and Daryl setting out on a journey to the city of Angkor, later known as Champa.

Other characters that they meet up with during the default game path are Mara, a soldier of Angkor, Katia, who hails from Imil and is the daughter of its mayor, Seles, an attendant to Iria, the queen of Anemos, Azal, a soldier and nobleman of Lemuria, Hoshura, a warrior of Izumo, and Tamina, called Tam, who comes from Prox.

Along the way, the group will meet up with the taciturn warrior Darius, Duke Jordan Ailron, Iria, queen of Anemos, and General Corval.

Project Iris was being developed by Plus One Productions, a now defunct fan game team lead by Infinity Plus One and Chrono Ivan, who headed the programming and writing respectively. Back in 2006 they put out a call to the fandom at large, asking for writers, musicians, designers, and others with game development skills. They compiled a FAQ detailing the basic nature of the project and the people whom they needed.