From Golden Sun Universe
(Redirected from The Golden Sun)
Jump to: navigation, search

This page pertains to the events triggered in The Lost Age, for the game, see Golden Sun. 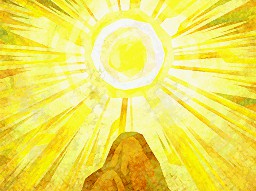 The Sun Saga depiction of the Golden Sun event above Mt. Aleph.

The Golden Sun event is the name given to the events that occur in the final sequence of The Lost Age, specifically, the blast of energy that was emitted when the four Elemental Lighthouses were lit and Alchemy was restored to the world.

Alchemy was once a force so powerful that, if abused, could lead to the end of the world. Seeing this happen, the civilizations of Weyard's ancient past sealed Alchemy away with the four Elemental Lighthouses and housed the Elemental Stars in Mount Aleph.

But the unknown side effect of this sealing was the decline of Weyard itself. Without Alchemy, the world lacked the "nutrients" needed to keep itself alive, and slowly began to crumble away. Continents split and shrank, civilizations fell and lost their once-great technology, and Gaia Falls continually eroded Weyard's edges, a phenomenon that, if left unchecked, would lead to the destruction of the world.

Before the events of the first Golden Sun game, three people(s) became aware of Weyard's decline. King Hydros of Lemuria, the people of Prox and Alex. King Hydros attempted to send someone out to investigate his theory of decline, but was blocked by the Lemurian Senate, who were fearful of the return of the dangerous powers of Alchemy. Prox, too, sent out warriors, however, they stumbled into traps within Sol Sanctum, the resting place of the Elemental Stars, and most of their party was wiped out. They did not give up, and the two survivors, Saturos and Menardi returned, this time following Kraden, Isaac, Garet and Jenna into the inner chamber. By taking Kraden and Jenna hostage, they were able to secure three of the four stars, before fleeing as Mount Aleph violently returned to its original volcanic state. Isaac and Garet, as well as the town of Vale were saved by the Wise One, a godlike being who entrusted the two Adepts to retrieve the stars and halt the return of Alchemy.

The nearest Lighthouse was Mercury Lighthouse, and however, before Isaac and Garet (now accompanied by Ivan and Mia), could reach the top, it was set alight by the Proxians, Saturos and Menardi, who were being helped by the traitor of Vale, Felix and the traitor of the Mercury Clan, Mia's cousin, Alex. Though Isaac's party was able to defeat Saturos in combat (he being significantly weakened by the light of the Mercury Star, which was of an element opposite to his own), they were not able to stop the Proxian from escaping, and were forced to chase them across Angara and Gondowan to the next Lighthouse, Venus Lighthouse to the south. On the way, Saturos' group kidnapped the Jupiter Adept, Sheba, expecting to need a Jupiter Adept for the Jupiter Lighthouse. However, this time, Isaac's group arrive prior to the beacon being lit, and defeated Saturos and Menardi in a fierce battle. But this was not a victory, as the two were able to buy just enough time to throw in the Venus Star and light the beacon, before dying themselves in a final fight to the death with Isaac's group. The resulting shocks from the ignition of the Lighthouse sent Sheba and Felix plummeting into the ocean, while Isaac's group used a Lemurian Ship borrowed from Babi, leader of Tolbi, to search for Lemuria. 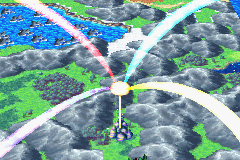 At the end of The Lost Age, the four Elemental Lighthouses shoot beams from their lit beacons to form the Golden Sun directly above Mt. Aleph

But Felix and Sheba were not dead. Indeed, as they traveled, Isaac's group heard of Felix's bravery and heroism, as he saved Izumo from a fierce Serpent, and re-forged the Trident to defeat the enraged sea-god, Poseidon. With him still alive, Isaac's group headed off to the third Lighthouse, Jupiter Lighthouse, where they were set upon by two more Proxians, Agatio and Karst, the latter being the sister of the fallen Menardi. This trap threatened to doom Isaac's group, but they were saved at the last minute by Felix, who, despite lighting the beacon, fought with the Proxians and got them to retreat, but not before they obtained the final star from Isaac's group. Alex too, was briefly seen, seemingly still caring for his cousin, Mia, who was the target of the trap.

Felix revealed the truth to Isaac's group- that the world was doomed without the re-ignition of the four lighthouses, and that his parents, along with Isaac's thought-dead father, were being held hostage in Prox. With this, they joined forces and set off for the final Lighthouse. Here, they were tested by the Wise One, who turned their parents into the Doom Dragon, seeing if, upon realizing that they'd killed their own parents, they still had the resolve to fire the beacon. They did, and the power of the forming Golden Sun revived their parents, before converging on Mount Aleph. But unbeknownst to the party, Alex had desired this all along. He was waiting at the top of Mount Aleph to collect all the power of the Golden Sun for himself. But he did not gather omnipotence, nor did he obtain eternal life. The Wise One had in fact, all the way back in Sol Sanctum, imbued the Mars Star to give some of the Golden Sun's power to Isaac's group. Outraged, Alex attacked the Wise One, but was quickly overpowered, before he was drawn into the earth when Mount Aleph collapsed. 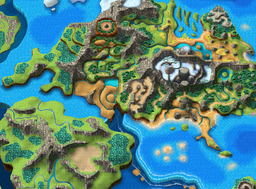 One major effect of the Golden Sun was major changes in the topography of Weyard, as evidenced by the altered map of Angara.

The aftermath of the firing of all four beacons was incredible. It was both hailed as a miracle and cursed as a disaster. Earthquakes and Tsunamis ravaged the land, with towns like Izumo being completely destroyed. Weyard itself changed drastically, with the landscape radically altering in the 30 years between The Lost Age and Dark Dawn. The Great Eastern Sea was divided into an upper-half and a lower-half. Meanwhile, Angara would be divided by large mountain ranges, making traveling difficult. In addition, Angara would become separated from Gondowan, causing the Karagol Sea to become open to the Great Eastern Sea.

However, there were several other aftereffects, some people turned into beasts, and some beasts turned into people, forming a new species known as the beastmen. These beastmen would gather together in northeast Angara to form the country of Morgal, with the city of Belinsk being the capital. Many small villages, such as Bilibin, underwent a rapid expansion and became full-fledged countries. In addition, many of these countries, having been run by elders or mayors, would transform into monarchies.

And the group at the center of it all became known as "the Warriors of Vale". This group, having felt the effects of the Golden Sun first hand, gained prolonged life, and did not age anywhere near as rapidly as everyone else (as is oft commented, the original Warriors of Vale may even outlive their own children). As a result of their deeds, the existence of Adepts would become known to the world at large, with countries like Kaocho going so far as to attempt to recruit Adepts for their military.

However, perhaps the most mysterious aftereffect was the emergence of Psynergy Vortexes, which became one of the subjects of study for Isaac and Garet. Psynergy Vortexes tended to appear every ten years following the Golden Sun event, and were known for absorbing any Psynergy within range. One such Vortex was so large and destructive, that it became known as the Mourning Moon. Isaac and Garet would build a cabin near Mt. Aleph, with the goal of studying the causes of the Psynergy Vortexes.