A message from Golden Sun Universe:

Before you read this page, we here at GSU would like to remind you that this FAQ is a fake. It has been duplicated here in its entirety largely for its humorous value. Please do not take this false FAQ seriously. We cannot be held responsible for the time you may waste trying to obtain the Wheat Sword. Thank you, and enjoy: 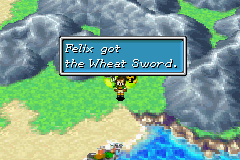 A screenshot of Felix obtaining the Wheat Sword.

I would like to say that it took me weeks of research to figure out how to forge the Wheat Sword, with a lot of anger, and I had to replace my GBA after throwing it against the wall...But anyways, here it is! You need to have gotten to Lemuria before you can start getting the power of the Wheat Sword.

Here is a screen shot of Felix obtaining the Wheat Sword: 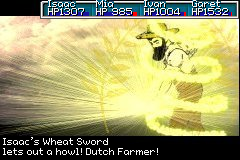 A screenshot of the Dutch Farmer unleash.

Statistics of the Wheat Sword:

-Get the bone found in Lemuria, and give it to the dog

-It will trade you the seeds

-Use the seeds in Prox with growth to create a vine

-Climb the vine to find the lost Proxian

-He will tell you about a cave in Lemuria

-In that cave, you find the rare stone

-Give the rare stone to the healer in Madra

-The healer will give you 4 Silver Goblets

-Give the Silver Goblets to the Mayors of Madra, Alhafra, Daila, and Contigo

-When you do this, a cave opens in the Anemos Crater

-In there you meet Dullahan!

-Defeat Dullahan, and you get a small jewel

-Inside is Saturos and Menardi!

-You go to fight them, but they are fighting eachother!

-After they kill each other, you take Saturos' Armor

-Give the armor to the mayor of Prox

-He will give you the Bottle of Fire

-Give the Bottle of Fire to the penguins, and they will get angry and attack

-Kill the penguins, and cook them with the Bottle of Fire.

-Give the cooked penguins to the hungry kid in Alhafra

-He will give you a coupon

-Use that coupon like a game ticket in Contigo

-You will win the Super Potion

-Use the Super Potion on Jenna, and she will become immortal

-She will fall into the lighthouse, and Isaac and Felix jump in after her

-Felix and Isaac are transported to Crossbone Isles.

-There they find out that Jenna has been kidnapped by Red Face, Deadbeard's brother!

-Red Face is stronger than Dullahan, and has immunity to Psynergy, Djinn, and Summons 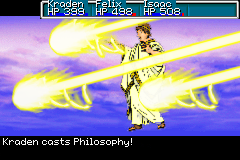 A screenshot of the Philosophy attack.

-You must defeat him by having Kraden cast Philosophy!

-After defeating Red Face, you get the key to Jenna's Cell and the Time Cube

-Travel back in time with Time Travel, and go to Lemuria.

-You will then meet Piers, and he will give you a strange, locked box

-Use Time Travel again to return to the present, and regroup in Madra.

-Give the box to Piers, who remembers that there is a cave under his uncles bed

-In the cave, you meet the Lost Lemurian

-He gives you the Super Lucky Medal, which you use with Lemuria's fountain

-When you win, you get the Hilt of Fields

-Garet takes the hilt, and gets angry.

-"There isn't a blade on this!" He shouts, and throws the hilt into the ocean

-A mermaid appears, and casts bubble on your party

-Now you can go underwater!

-To enter the Mermaid Queen's Chamber, you must Mind Read the right guard

-Tell the left guard the password the right guard thought

-You meet the Mermaid Queen, who gives you the Coral Key

-In the room, you find the Mercury Star.

-Take the star, and the Lighthouse goes out

-Alex Teleports into the room

-"What are you doing! Give me back the elemental star!" he shouts, holding out his hand

-Alex will then be crushed to the ground, unconscience

-Take Alex' bag of things, and leave the Mercury Star next to him and leave

-In his bag, there is a Key

-Use the key next to the "Glitch" in Anemos Sanctum, found by going through the wall

-A portal appears, and you go through it

-You reappear on the bottom of Gaia Falls.

-Down there, there is an alter Weyard, where humans are evil and monsters are good

-A vermin will approach you, and speak to you

-After talking with you, it gives you the Hilt of Fields

-"No!" Garet shouts, and takes the Hilt "It still has no blade!"

-Sheba takes the hilt, and slaps Garet in the face

-Garet begins to move, but does nothing

-You take the Hilt of Fields to Champa, where Briggs' Grandmother says to go find the other piece

-She didn't tell you what the other piece was

-You then go to Tolbi, where Babi's advisor has taken over

-Return the Cloak Ball, and he will give you Babi's Chest

-Open the Chest with another Key in Alex' bag

-Inside is the High Quality Flour

-Go to Contigo, and talk to the guy who gives you the corn

-"I've only got one corn left, you cannot have it!"

-Trade him Alex' bag, and he happily gives you the corn

-Go to Yallam, and give the High Quality Flour and all 3 Corn to Sunshine

-He forges the Wheat Metal

-Head to Champa, where you will meet Feizhi

-She proceeds in beating the crap out of Felix

-Felix has no chance of a comeback, he can't match her speed, and is defeated

-Isaac takes the Gold Ring from Felix, who is now crumpled on the ground

-Feizhi gives Isaac the Mythril Gloves, and kisses him

-Jenna gets angry, and slaps Isaac when Feizhi leaves

-The group leaves Felix on the ground, and goes to Briggs's Grandmother

-It splits into 4, such as the Lighthouses

-Isaac cannot wield the Wheat Sword, and drops it!

-They all proceed to lift the Wheat Sword, but each drop it

-"Look! We need the Mythril Gloves that Feizhi gave us"

-At the mention of Feizhi, Felix wakes up, startled

-She lifts the Wheat Sword

-"You're right. We do need them" Jenna says

-Alex teleports in, and demands to have his bag back

-Jenna swings the wheat sword once, and Alex falls

-Everyone else is amazed, and has the "!" bubble appear above their heads

-Jenna gives the Mythril Gloves and Wheat Sword to Felix

-Felix puts on Mythril Gloves, and equips the Wheat Sword

-The party exits Champa, leaving Alex on the ground

The wheat sword is the most powerful sword of the game. Unfortunatly, the Wheat Sword can only be wielded by the person who wears the Mytrhil Gloves that Feizhi gives you. I don't know why, but that is the reason. Also, the Wheat Sword is a longsword, but all characters are able to wield it because of the Mythril Gloves.

Battling with the Wheat Sword

From the experiments that I've done I've found that the Wheat Sword uses the following formula for attacks...

Special physical attacks take this Base Damage and modify it with two variables: Mult Mod and Add Mod. The formula used is: Base Damage * Mult Mod + Add Mod

Critical hits have an inherent Mult Mod of 1.25. In addition to this, they have a variable Add Mod that depends on the target's Level: the formula being Add Mod = Target's Level / 5 + 6."

The Wheat Sword is special, in the sense that the Add Mod is multiplied by 1.75, and the Mult Mod is 1.25 normally, and becomes 1.6 on a Critical Hit.

A: Your friend just ruined the entire cheat. I'm sorry, but he/she will have to start a new game, or go without the wonder of the Wheat Sword.

Q: When I fused the Hilt of Fields and Wheat Metal, it split into four, and turned into alternate Kradens that had elemental Psynergy, who each had one Wheat Sword equipped!

Q: Is this a glitch only on his cart? Did this happen to anyone else? WILL IT HAPPEN TO ME!!!

A: No, if you are smart and kept the Laughing fungus, the alternate Kradens will laugh uncontrollably, and the real Kraden will step in and destroy them. Their Wheat Sword's are fakes, and will vanish.

Q: I tried to fight the Alternate Kradens without the Laughing Fungus, and they defeated me! Kraden was left behind, but he was unable to survive! Kraden was killed!

A: No! You are not supposed to do that! In doing that, you have unlocked the sequence of events that wll cause the world to suddenly explode! Tell your friend to destroy his Gameboy Advance and his copy of Golden Sun: The Lost Age, and burn the remains before it is too late!

Q: Okay, I did that, but my friend linked up with me to do battle mode. Is my copy of Golden Sun: The Lost Age going to experience the same horrors?

A: No, as long as he doesn't do the same thing again, we will be fine.

Q: I'm having some trouble...At the end, when Felix is supposed to wake up and join you, there's something wrong. He woke up, but ran away to join the Temple of Kraden! How do I get him back!?! Help right away please!

A: Follow Felix! You have done something wonderful! You have begun the sequence of events to unlock Kraden joining your party!