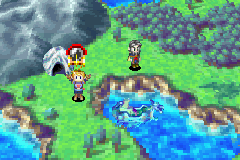 Iodem asks Isaac to use the orb on the Lemurian ship scuttled at Idejima.

A Black Orb (ブラックオーブ, Black Orb?), renamed Black Crystal (くろすいしょう, Kurosuishō?, lit. Black Quartz or Black Crystal) in Golden Sun: The Lost Age, is an item required to pilot ships from Lemuria. In order to utilize the orb, a fairly proficient Psynergy user (may be an Adept or at least an individual close to the concept) must be able to use Psynergy to direct and control the ship. Each Black Orb controls a specific Lemurian ship; a Black Orb corresponding to one vessel cannot be used to control another.

In Golden Sun, Isaac can first receive the Black Orb corresponding to the ship that Lord Babi has when he is at Idejima with Iodem, where they find what appears to be Babi's ship but is in fact the ship of Saturos and Menardi. Iodem mistakes it for Babi's ship, so he hands Isaac the orb and instructs him to use the orb to raise the ship; when the ship fails to react, Iodem takes the Orb back from Isaac, realizing that Babi's ship should still be where it always has been - hidden within Lalivero.

After clearing Venus Lighthouse and coming back to Lalivero, Isaac will then receive the Black Orb from Iodem, who instructs him to the enclose port in town where Babi's ship is kept hidden. When using the Black Orb, Babi's ship rises and the party of Adepts board it to sail out into the Great Eastern Sea.

In The Lost Age[edit | edit source]

The Mercury Adept, Piers, has his own Lemurian ship with its own Black Orb to control it. It is taken away by the people of Madra when they jail him, suspecting him to be one of the Champa pirates. It is then stolen by Kibombo warriors. Felix and company travel to Kibombo and help Piers to reclaim his Black Orb, then after visiting the Madrans, they can go to Piers's ship and make their way to the lower deck, where they use the Black Orb to activate the ship and it can sail. Upon using Piers's Black Orb on the pedestal in the lower deck, it disappears from the inventory.

Oddly enough, when Isaac rejoins you at Contigo, he may have the Black Orb in his inventory depending on whether you transferred or not, but it is now a useless item and may be seen as a waste of inventory space. The Black Orb is a Key Item, which cannot be sold in shops.