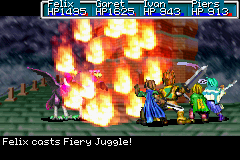 Juggle (ジャグリング, Juggling), Heat Juggle (ホットジャグリング, Hot Juggling), and Fiery Juggle (ナパームジャグリング, Napalm Juggling) are a series of Mars Psynergy that is only available in Golden Sun: The Lost Age.

Juggle, Heat Juggle, and Fiery Juggle are ranged, offensive Psynergies. The total amount of damage is determined by comparing the user's Mars Power to the target's Mars Resistance and using this value to modify the base power of the particular Psynergy.

Visually, the Juggle series features balls of flame that spins in a circle formation; the entire group then crashes into the targets. The number of balls increases with each successive stage: Juggle features three balls, Heat Juggle features five, and Fiery Juggle features seven.

Fiery Juggle's attack takes this base damage value and uses it in the following equation:

To word this in prose, Juggle, Heat Juggle, and Fiery Juggle take the base damage of the particular attack, and then modifies this by how much higher or lower the user's Mars Power is than the target's Mars Resistance. The difference between the user's Mars Power and the target's Mars Resistance is then divided by 200, then 1 is added to this, resulting in what can be called the "elemental damage multiplier". This number is what the Psynergies' damage is multiplied by.

For example, if an Adept with a Mars Power of 150 casts Fiery Juggle on a monster with a Mars Resistance of 50:

Therefore, a Fiery Juggle cast under these circumstances would deal approximately 225 points of damage to the targeted enemy. Since Fiery Juggle is a ranged Psynergy, adjacent targets take a percentage of the total damage, with the percentage decreasing as distance from the main target increases.

The Juggle series is unique to the Pierrot class series, which is available to Adepts of all elements. This class is unique in that it requires that a specific item, the Mysterious Card, be equipped in order to access the class. Since the Mysterious Card is currently only found in The Lost Age, the Juggle series appears only in that game. Juggle is learned at Level 5, Heat Juggle at Level 17, and Fiery Juggle at Level 37.

General: The Juggle series is a fairly useful series. The Juggle series is quite powerful as a whole, being roughly equivalent to the Beam Psynergy series, but available at a lower level. The biggest drawback when compared to Beam is the fact that the Pierrot class has an abnormally low PP cap, and so although Juggle is the cheaper of the two series, it will probably consume more of the Adept's PP meter.

Golden Sun: The Lost Age: The Juggle series is available extremely early, as the Mysterious Card is found in the Kandorean Temple, one of the first dungeons the player will explore. Due to unequal Djinn distributions, the player will usually equip the Card to one Adept. At this point, Juggle is an excellent early game Psynergy, and is one of the best options for fighting the Chestbeater trio found at the end of the dungeon. After this point, use of the Psynergy depends largely on the use of the Mysterious Card. However, Fiery Juggle has decent endgame power, being the Pierrot's strongest Mars-based attack, despite its strain on the Adept's PP pool.