From Golden Sun Universe
(Redirected from Stone of Sages)
Jump to: navigation, search 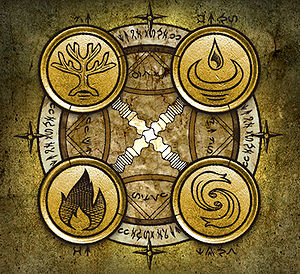 A picture of the four elements as seen in Dark Dawn

In the Golden Sun games, Alchemy is the name given to the force at work when the four base elements combine to create reality, and is also used as a term for the study of this force. Alchemy was sealed long ago by the ancients by means of the four Elemental Lighthouses, and the seal lifted during the course or the first two games. This page therefore contain spoilers pertaining to all three games.

"The force of the four elemental powers and the study of how they combine to create reality is known as Alchemy. The ancients sealed away the force of Alchemy, and the Warriors of Vale went on their Golden Sun quest to restore Alchemy."

The four base elements are Earth, Fire, Water and Wind (also known as Venus, Mars, Mercury and Jupiter, respectively). These combine to create all things in Weyard. These elements can be directly manipulated through the use of Psynergy and people who are able to use Psynergy are called Adepts. The Elemental Stars and Elemental Lighthouses are ancient machines that sealed away one element each, and are, prior to the Golden Sun event, the prominent sources of Alchemy in Weyard, though others do (or at least, did) exist (such as the Elemental Rocks, Lemuria and Mount Aleph). The act of releasing the seal on Alchemy is called the Golden Sun event, named for the sun-like blast of energy that was released when all four Lighthouses were lit.

In addition to the four base elements, there are two other forces (which may or may not be elements), Light and Dark. Light has not been described in detail thus far in the franchise. Dark too has not been described in detail, but is known to be a general negative force that is the diametric opposite of Light and Fire, and is responsible for making vicious monsters, such as those seen in the Grave Eclipse, the Chaos Hound and the Tanglewood's nocturnal form.

The Philosopher's Stone, also called the Stone of Sages, is said to be a source of unrivalled power and eternal life. Though the details are unknown, it has been confirmed that the Wise One is a Philosoper's Stone. Initially, the Golden Sun event was said to be the blast of light that gave birth to this stone, but the actual effects of the event were influenced by the Wise One, so it is unclear as to exactly what happened atop Mount Aleph when the Golden Sun event occurred.

In Weyard's ancient past, the races, notably the Jenei (now known as Adepts) and the Exathi (a skilled race of non-Adept engineers), had proficient control over the four base elements. This was in large part due to their incredible technology, which drove civilisation to great and prosperous heights. However, their greed was effectively endless, and mastery of the four elements did not satiate their desires. Eventually, they desired even more, a quest to effectively obtain omnipotence. This resulted in the creation of Luna Tower (as it was then known), a device that was designed to absorb and harvest the light of Sol (the Sun). However, this device worked too well, and created a phenomenon akin to the Grave Eclipse, leading to the tower being renamed Eclipse Tower, and being sealed underground. Another invention was the Apollo Lens, a device hailed as the most powerful weapon of the ancient world. The great and terrible power of these devices lead to the ancient civilisation resolving to place a seal on Alchemy, using the Elemental Lighthouses to lock it away so that no-one could abuse its potentially world-destroying power. However, what they did not know was that Alchemy was the lifeforce of Weyard itself, and that sealing it actually doomed the world to eventual destruction.

In Golden Sun, the people of Prox sought to re-ignite the lighthouses, as their town sat on the edge of Weyard and was approaching certain doom as the land slowly crumbled away. This lead to their warriors, assisted by the enigmatic Mercury Adept Alex, to attempt to release the seal on Alchemy. The Wise One intervened, saving the lives of Isaac and Garet who had been forced into retrieving the Elemental Stars from the resting place inside Sol Sanctum, and tasked them with stopping the seal from being released. Over the course of the two games, they come to learn of Weyard's gradual demise and resolve to help light the four beacons, a task they succeed in, triggering what would be later called the Golden Sun event.

But all was not well. The Golden Sun event causes cataclysmic changes in Weyard. One such change is the sudden appearance of Psynergy Vortexes, strange black orbs that suck the Psynergy from anything that gets too close. One was so large that it was termed the Mourning Moon for the sheer misery it created. That said, after releasing the seal, civilisations also boomed, with many turning from villages into full-fledged countries. Thus, the Golden Sun even was both hailed and cursed by the citizens of Weyard.