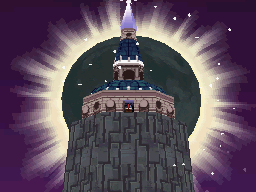 The pinnacle of Eclipse Tower, shown just as the Grave Eclipse is about to begin. The upper room was the only portion to remain above ground, and was known as a museum by the citizens of Belinsk.

Eclipse Tower (also known by its more benign name Luna Tower) is a tower hidden in the ruins below Belinsk, capital of Morgal. Its Encyclopedia entry reads as follows:

This ancient edifice is sealed away in the Belinsk ruins. It radiates power in a manner similar to the Elemental Lighthouses. It was sealed away because of the forbidden energies associated with it. 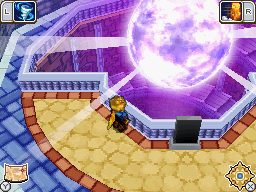 Inside Eclipse Tower's top chamber shortly after it rises from the ground. The sphere of energy provides the Eclipse summon to Matthew's party.

The Eclipse Tower was originally built by the Jenei, precursors of modern Adepts, as part of an attempt to gain more power beyond their control of the four elements. The apparent goal of the Tower was to allow the Jenei to gain power over the fundamentals of light and darkness. The Tower is powered by a machine known as an Alchemy Dynamo. The Tower is described as being similar in overall function to the Elemental Lighthouses.

When powered, Eclipse Tower absorbs light from the sun, by causing a solar eclipse. However, a catastrophic side effect of this is that anything draped in the shadow the eclipse casts is void from the normal energies (light and heat) that repel monsters of darkness, making them not only spawn frequently, but also more powerful than they would otherwise be. It is stated that Eclipse Tower is designed to collect a certain amount of light, then release that light as a cataclysmic burst. However, the Tower can be shut down prematurely by forcing large amounts of light into the tower. The tower is also home to the Eclipse summon, however, the nature of the relationship between the two is largely unknown.

In ancient times, Eclipse Tower was sealed up following a great cataclysm caused by its functions. A great number of difficult puzzles were created to ensure that the Tower and its associated machinery could not be breached except by a coalition of Adepts capable of producing all four elements of Psynergy; apparently, the ancient designers perceived that this would prove that all four of the ancient clans of Weyard were once again acting in concert and thus had earned the privilege to once again attempt to pursue the tower's functionality. As the clans had all but evaporated by Weyard's modern era, however, it can be assumed that the ancients made an erroneous assumption about the distant future in this critical regard.

The vast majority of the tower remained below ground for centuries. However, some knowledge of the ruins became available to the citizens of modern-day Belinsk, who would hold a monthly celebration to pray for the revival of the ruins. The peak of the tower was the only portion above ground, and apparently functioned as a museum; however, the citizens were apparently ignorant of the Tower's true purpose. 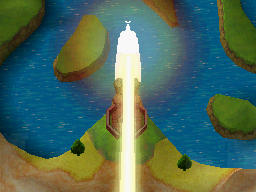 Eclipse Tower being overloaded with light fired at it by the Apollo Lens at the end of Dark Dawn.

Three groups sought the activation of Eclipse Tower. Volechek was tricked into believing it was a weapon that he could use to protect his country from Bilibin and Sana, and thus sought to activate it (though immediately tried to reverse it when he realized Belinsk too would be harmed by its activation). The Tuaparang sought its activation, with their objective being to use it as motivation for Matthew's group to power up the Apollo Lens, but also valued it for its own sake (as they attempted to stop Matthew's group from ending the Grave Eclipse). The final party was Alex, who worked with the Tuaparang, though his true motives were unclear, as he eventually rebelled against Blados and Chalis, the Tuaparang warriors placed in charge of the operation, and ended up helping to stop the Grave Eclipse.

These groups worked to hold Eoleo and Hou Ju hostage in Belinsk Castle. The consequence of this was forcing Matthew and Ryu Kou's group(s) to attempt to sneak into the castle via Belinsk Ruins. To do this required the use of the Magma Orb, which, unbeknownst to them, was the start-up device for the Alchemy Dynamo. After being forced to head into the depths of the ruins, Ryu Kou, despite the pleas of everyone else present to do otherwise, activated the Dynamo, and activated Eclipse Tower, triggering the Grave Eclipse.

To rectify this, Matthew's party activated the Apollo Lens, which blasted Eclipse Tower with concentrated light and ended the Grave Eclipse. Eclipse Tower was shut down, and the people of Belinsk would rename the tower Sol Tower, as it seemed more fitting. Additionally, new measures were taken to ensure that Eclipse Tower would never again be activated.

Eclipse: found in the highest chamber of the tower. Can be collected as soon as the Alchemy Dynamo has been activated. It must be collected before the player activates the ship-related cutscenes to leave Belinsk, or the summon will be permanently lost.