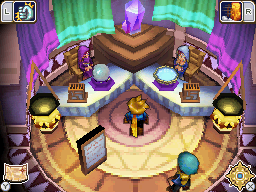 The local fortune-tellers in Harapa.

Nhamu and Nhemo are NPCs first met in Golden Sun: Dark Dawn. The two run a fortune-telling business from a tent in Harapa, making them one of the city's main attractions. The source of their powers is unknown, but the two possess the ability to accurately predict the future.

Nhamu (ナムー Nhamu) peers into the distant future by gazing into her crystal ball. When the player first speaks to her, she will look into their future, for no charge. She apparently foresees the role Matthew's party will have in the Grave Eclipse, though her description of the future is vague. Following the vision, she will collapse on the floor and order the group to leave, calling them cursed. She will not re-read the party's fortune again, but will order them away. Her Encyclopedia entry reads as follows:

This fortune-teller peers into the distant future by gazing into her crystal ball. She and her partner, Nhemo, provide their psychic talents in the city of Harapa.

Nhemo (ニモー Nhemo) predicts what will happen in the immediate future by looking into the waters in her golden bowl. Nhemo charges 5 coins for her services, and will give the player vague hints about what they should do next. However, since returning to Harapa is not immediately possible after crossing the Clouds of Passaj, her visions are limited to what happens in Ei-Jei, limiting her usefulness. Should the player return to Harapa during the Grave Eclipse, it is revealed that most of the town was saved thanks to a last minute prediction by Nhemo. She warns the townspeople to remain in the light to avoid the deadly monsters that the Grave Eclipse has brought forth. She also appears to foresee an end to the Eclipse. Her Encyclopedia entry reads as follows:

This fortune-teller probes the near future by looking into the calm waters in her golden bowl. She and her partner, Nhamu, provide their psychic talents in the city of Harapa.

Spoilers end here. Those who did not want the plot ruined for them may now continue reading as normal.
Retrieved from "https://goldensunwiki.net/w/index.php?title=Nhamu_and_Nhemo&oldid=62476"
Categories: