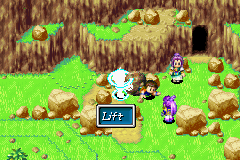 In order to block Silk Road, Saturos' group triggered a landslide at the Alpine Crossing. This had the side effect of trapping Hsu under a rock.

The Silk Road is a major trade route that starts in Xian, in eastern Angara (where merchants buy silk), and ends in Tolbi, in the southernmost region of Angara before entering northern Gondowan. It is quite obviously based upon the real-world Silk Road that was traversed in ancient times to reach Xi'an, China, its easternmost end. Master Hammet became rich from exploiting this route and founded Kalay between the two points, following advice he received from the prophetic Jupiter Adepts of Hesperia.

In order to travel from Xian to Tolbi, one would travel north-west from Xian to the Alpine Crossing, where one could either go north and stop in Altin or continue west to Lama Temple. Once at Lama Temple, one would travel south-west through the arid Lamakan Desert to Kalay. From there, one would then go to Kalay's docks on the Karagol Sea, then around the western edge of the sea, eventually to reach Tolbi on the other side. One could also take a ship across the sea, however this is not technically a part of Silk Road. In Golden Sun, Isaac and his companions roughly follow this route, in pursuit of Saturos' group (who is responsible for blocking the route at several points, such as by filling the Alpine Crossing with boulders) however they find that the portion of Silk road north of Kalay Docks is blocked by a landslide, forcing them to take the Tolbi-bound Ship from Kalay Docks, rather than the (much safer) land route.

Kraden has reviewed the contents of this article and believes it could do with a bit of expansion. Please oblige him to meet the quality standards of the rest of this tome of knowledge.
Retrieved from "https://goldensunwiki.net/w/index.php?title=Silk_Road&oldid=61447"
Categories: