The Legend of Zelda

Our affiliate wiki, Zelda Wiki, has a more in depth article on this subject.

This logo is the basis for all Zelda games' title screen designs.

The Legend of Zelda is a long-running series of puzzle-adventure games developed and published by Nintendo. Many reviews of Golden Sun games compare the puzzle-filled dungeons to those of Zelda fame, and the series' elven main character Link, along with other Zelda characters, are main playable characters in Super Smash Bros. Brawl. Camelot Software Planning, in their evident drawing of influence from this series, apparently made a specific nod to the series during development of Golden Sun: The Lost Age: hidden within the code of the game cart is an unused NPC sprite sheet that appears to be Link.

Nintendo game designer Shigeru Miyamoto, after having created and established the successful Mario franchise for Nintendo to put that company on the map, designed and released The Legend of Zelda for the NES in 1986. For its time, The Legend of Zelda was quite advanced, featuring an open-ended game world to explore at one's leisure, puzzle-and-monster-filled dungeons to complete using dozens of utilities such as bombs, boomerangs, and a bow and arrow, and the cartridge's ability to save progress via battery-backed memory. The game was wildly popular in Japan and North America, and many consider it one of the most important video games ever made, because like Super Mario Bros. before it, The Legend of Zelda broke new ground into what a video game can be.

Zelda was made into a full Nintendo franchise in the years afterward with the release of several follow-ups: 1988's radical action-RPG departure Zelda II: The Adventure of Link, 1992's SNES entry The Legend of Zelda: A Link to the Past, and The Legend of Zelda: Link's Awakening on Game Boy. After another hiatus, the series made the transition to 3D on the Nintendo 64 in November 1998's The Legend of Zelda: Ocarina of Time, and it is lauded as one of the finest adventure games ever developed. With a new, more realistic design for the characters, a giant game world with a darker, more narrative mood imparted onto the experience, and a lock-on-based 3D combat system that would serve as a model for 3D game design forever afterwards, Ocarina of Time became one of the most notable games in both the series and the game industry in general. It is because of this that the characters and properties from Ocarina of Time are featured in Super Smash Bros., and its direct sequel, 2000's The Legend of Zelda: Majora's Mask, is featured as well in Super Smash Bros. Melee.

After Melee, the Zelda franchise went into a radical new direction in art style for the 2003 GameCube release of The Legend of Zelda: The Wind Waker, featuring cel-shaded graphics and a very different cartoon-like incarnation of Link that would later be referred to as "Windwaker Link" to differentiate from "Ocarina Link". Fans were shocked initially but many accepted the new style in good grace with the game's release. Since then the style has been continued in new releases such as The Minish Cap for GBA, Four Swords Adventures for the GameCube, and the official Wind Waker continuation Phantom Hourglass for the Nintendo DS. However, the franchise's Wii launch title, The Legend of Zelda: Twilight Princess, went back to a more realistic character and world design independent of the other games, featuring yet another Link redesign. With a lengthy development time, Twilight Princess was met with very glowing reviews and is considered perhaps the best Zelda experience yet. Partially as a result of this, the "Twilight Princess Link" is the incarnation of Link that features as a playable character in Super Smash Bros. Brawl.

Generally, each game in The Legend of Zelda series is a fantasy-adventure game with action and puzzle-solving elements. The player controls either a boy or young man named Link, garbed in green clothing and a trademark green cap and possessing some of the physical characteristics of an elf. In many Zelda games Link is called upon (by divine forces at times) to rescue Princess Zelda and the fictional world of Hyrule from (usually) the series antagonist, a demon named Ganon (or alternatively an imposing man whose name is extended as Ganondorf). The action often involves a divine relic known as the Triforce, a set of three magically bound golden triangles of great power, and the Master Sword, an evil-smiting blade that has served as perhaps Link's strongest weapon. One aspect of the franchise to make it notable, however, is that not many of the games in the series seem to share a chronology and continuity, and some games may not even take place in the same reality as other games in the series. In a sense, there are many different Links, Zeldas, and Ganon(dorf)s found in the franchise, with different sets of these characters being associated with different games in the franchise.

As stated above, reviews of Golden Sun games tend to draw comparison between their puzzle-filled dungeons to the ones in Zelda games, and how the puzzles require the usage of your available utilities to pass like Link's growing collection of tools in his own games. Link, being the long-running Nintendo staple character he is, has been a regular playable character in the Super Smash Bros. series, including Super Smash Bros. Brawl, the installment where Golden Sun's Isaac cameos as a computer-controlled "helper" character that can be summoned by playable characters like Link. There also exists one direct, albeit hidden, tie-in between the two series: 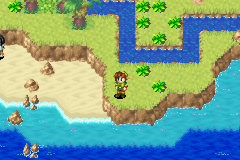 Camelot Software Planning, in their evident drawing of influence from this series, apparently made a specific nod to the series during development of Golden Sun: The Lost Age: hidden within the code of the game cart is an unused sprite sheet that appears to be Link as he would appear in this game if he were an "overworld-NPC". It being a full sprite sheet like all the other overworld NPCs in the game are means that it would have appeared properly animated and non-glitchy had the Link NPC been inserted anywhere in the actual game world. The Link NPC's sprites are registered as Sprite Sheet #220. It can only be speculated what purpose Camelot could have included the graphics for, and whether this was planned either to be the "real" Link or perhaps some other character who's a Link look-alike.

For those curious to see Link for themselves, the following is the Game Shark/Action Replay code to use:

For this code and any other codes for The Lost Age to work, of course, you also need to have this Master Code active for it:

This essentially substitutes Link's sprite sheet in place of the normal Felix sprite sheet that is what the player controls all throughout the game, meaning you're now "playing as Link", to a small degree anyway. Felix's name and in-battle visuals are unchanged, only his out-of-battle appearance. Because NPC overworld sprites are set up slightly differently from the overworld sprites of playable characters (six available "directions" instead of eight, no run or hop animations, etc.) the effects of the above codes are slightly glitched; As soon as Link starts walking, he will remain in his walking animations even if you come to a full stop, but will automatically stand still as soon as you press A to open up the menu.