From Golden Sun Universe
(Redirected from Mayor of Vale)
Jump to: navigation, search

Garet's family is a family of Adepts who hail from the town of Vale. They are the largest family featured in the Golden Sun series. It consists of Garet, his father, mother, elder sister (Kay), younger brother (Aaron), grandfather (the Mayor of Vale), and grandmother. None of these characters are named in-game, but in the Debug Rooms, the names "Kay" and "Aaron" can be found next to portraits of his sister and brother respectively. Furthermore, in these rooms, Garet's family is given the surname "Jerra", although this appears to simply be a variation of "Garet" that was never properly translated (see here for full details). Thus, despite the large amounts of fan speculation that has lead to widespread use of these names, the unofficial and somewhat dubious nature of these sources means that for the purposes of this article, Garet's family will simply be referred to by their relation to Garet, rather than by name. 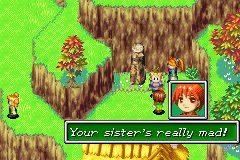 The youngest member of the family. He is known to tease his brother about his appetite but also promises Garet to protect the family in his brother's absence. Garet will encourage this if he returns to visit Vale after crossing the Lamakan Desert. At the outset of their quest, he gives Isaac the Catch Beads in place of his mother, Dora, who found it too painful to say goodbye to her son in person.

Garet's Brother: "Don't listen to him, Isaac! He's a pig! He'll eat anything that's not tied down!"

Garet's Sister: "Don't drink the water if it smells funny. And...take this with you, too."

[She gives Isaac an herb.]

Garet: "I know not to drink stagnant water, Sis!":

Garet's Brother: "Don't listen to him, Isaac! He's a pig! He'll eat anything that's not tied down!"

Garet's Brother: "Oh! That's right! Aunty Dora asked me to give this to you, Isaac." 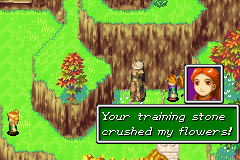 Garet's Sister as a field sprite in Vale.

The eldest of Garet's siblings, Garet's sister is somewhat bossy and overprotective of her flower garden (as seen in the beginning of Golden Sun, where Garet enrages her by crushing her garden while practicing his Psynergy). Despite this, she shows obvious concern for her brother and wishes him (and Isaac) well on the outset of their quest. Garet's sister can be interacted with while the party is on the way to Kraden's cottage and she complains that Garet's training stone had crushed her flowers.

Garet's Sister: "Don't drink the water if it smells funny. And...take this with you, too."

[She gives Isaac an herb.]

Garet's Sister: "Think again, Garet! It must be very difficult for Dora..."

Despite being concerned for her son as he sets out on his quest to save Weyard, Garet's mother puts on a strong outward appearance to give encouragement to Dora and Garet's father, both of whom suffer greatly from anxiety when their respective children leave Vale.

Garet's Mother: "As Garet's mother, I know how Dora must be feeling. But I still have Garet's father, while Dora has only Isaac. She doesn't want you to go, Isaac, but she knows you have to, and it hurts to see you leave."

As with the rest of his family, Garet's father cares deeply for his son, and becomes very anxious after Garet leaves on his quest to save Weyard. He takes to looking after Dora when she falls ill after Isaac's departure.

Garet's grandfather is also the Mayor of Vale, and plays an important role in the beginning of Golden Sun, namely, giving Garet (who passes the decision off to Isaac) the choice to follow the Wise One's instructions and pursue Saturos and Menardi, or simply ignore their predestined fate (the latter option leads to a premature "game over").

Garet's Grandfather: "Oooh, my grandson! Will Garet be safe in this eruption?!?"

Great Healer: "Acquiring the Elemental Stars is their fate alone."

Dora: "Are you suggesting we place the fate of the world...in the hands of Isaac and Garet?"

Garet's Grandfather: "Garet is only a child. You can't expect him to bear such a burden..."

Great Healer: "The Wise One has spoken. Each of you shares responsibility for this. Now, each of you must make your own decision!"

Garet's Grandfather: "Well, what good are those guys!? Sending children off with no help or direction..."

Dora: "I agree, but...They didn't give us any other choice."

Garet's Grandfather: "Then, when should they go?"

Dora: "It doesn't sound like we can afford to wait."

The elderly wife to the Mayor of Vale. Garet's grandmother lives with the rest of their family in Vale.

Garet's Family, as seen in the final sequences of The Lost Age.