The Golden Sun Hacking Community is a forum for Golden Sun fans that enjoy tinkering with the game's code, and is home to the Golden Sun: The Lost Age Editor. Founded by Atrius in October 2008, the site has gone through several different phases during its lifespan to become what it is today, with the primary purpose of hacking games from the Golden Sun series. While this still true, there are also sections for discussing other aspects of the games where members can communicate and socialize with each other should they wish. 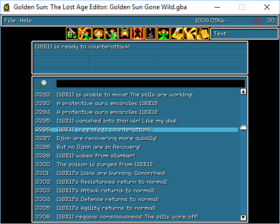 A screenshot of the text viewing/editing portion of the Editor.

While the general public may see hacking as a nefarious act, those who are familiar with the hobby will know that it can be a fun and harmless one. The editor is the primary tool that is commonly used by forum members, with patches and other tools being made available by a select few from time to time. A wide variety of patches have been released since the site's founding, ranging from difficulty hacks and overhauls to simple utility patches that allow hackers to customize their own hacks in a number of easy and fun ways. 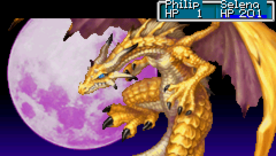 A screenshot an unused battle background; Eclipse has been modified to use it.

An invaluable reason for hacking the games is to develop a better understanding of how they function and what they hide. Many discoveries have been made by some of its members, including unused sprites, hidden battle animations, and even inaccessible maps and features. The debug menu and rooms are perhaps the most famous of these discoveries, though plenty of research has also gone into unique battle effects, tilemap data, and even formula calculation.

A screenshot of the forum, courtesy of the forum's greatest member His Sexiness, Lord Squirtle (AKA Salanewt/Salafrog/Sexy Bear).

The site itself has gone through many phases, along with changes in its administration and moderation at various times. While Atrius was the founding member of the board, he has since retired from the hacking scene in order to focus on his personal projects and career. These personal decisions led to him transferring his forum duties to the community's most trusted member and friend. Most of the community feels that the site would have died a swift, painless death if not for him.

Beyond administration, the forum itself is not unlike most other fansite forums that are drifting aimlessly through the Internet. It has a standard top-down style of organization where subforums are carefully categorized by subject, however broad they may be. Nobody really cares about most of these other subforums however, as members have access to a free, not-for-profit Discord channel where they can talk about these other subjects in a format that actually works well for them.